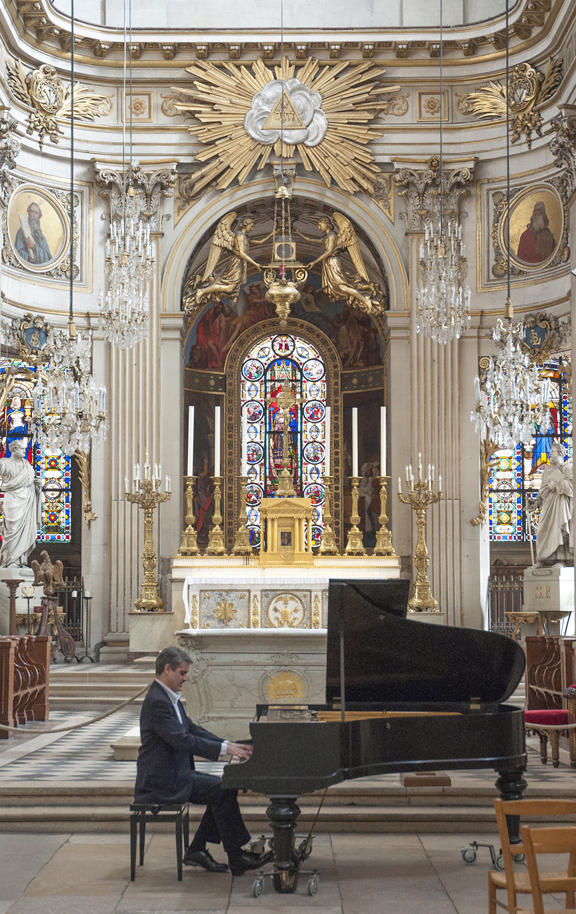 Stephen Porter has appeared internationally as a soloist over the past 25 years, at venues that include the Norwegian Academy of Music in Oslo, the Gothenburg Academy of Music and Drama in Sweden, the Sala Villa-Lobos at the University of Rio de Janeiro, Albert Long Hall in Istanbul, LSO St. Luke’s with the Amadeus Orchestra of London, Sarajevo as the featured soloist of the Bosnia International Music Festival, the Malmö Academy of Music in Sweden, and the Rockefeller Foundation at Bellagio, Italy.  He is a four-time artist resident of the Cité Internationale des Arts in Paris, and in 2021-22 he is Artist in Residence at Texas A&M Central University.

Recent New York City recitals at SubCulture, the Fabbri Mansion and Symphony Space have been praised by the press, with New York Arts calling Mr. Porter’s twenty-four Debussy Preludes “a powerful revelation…as if the voice of the composer were speaking to us.”  His Schubert performances are widely admired, the Boston Musical Intelligencer says he “reached the level of sublimity,” and in the acclaimed biography Beethoven:  Anguish and Triumph, author Jan Swafford calls his interpretation of Beethoven’s Appassionata “unforgettable.”

He has had the privilege of performing and recording with two Grammy Award winning soloists, mezzo-soprano Krista River and bass-baritone Dashon Burton. His recitals with Ms. River include works by Ned Rorem and John Harbison coached by the composers.  They have recorded a disc of Grieg’s “Haugtussa,” six Lyric Pieces, and Schumann’s “Frauenliebe und leben” on an 1893 Erard from the Frederick Historic Piano Collection. With Mr. Burton he has recorded the music of Toni Lester, released on her CD “Will The Time Ever Come?”

Stephen Porter premieres the work of many contemporary composers, most recently the music of Martin Skafte (Sweden), Toni Lester (USA), Caio Senna (Brazil), Norberto Oldrini (Italy) and Andrew List (USA) in recitals in Norway, Sweden, Italy, Paris and the United States, as well as his “Re-Imagining Composers” series for the Composer’s Voice at Harvard University and in New York City.

Critics have noted Mr. Porter’s style of speaking to the audience — all too rare in classical music today — which creates a more involved listening experience, and a communication between composer, artist and listener.  New York Arts describes his “engaging discussions of the composer and the works, not only providing us with background, but preparing us to listen, to enter Debussy’s particular world of sounds…The audience could not have been better prepared for the rich experience Mr. Porter created for them.” He was named artist-resident of the Cité Internationale des Arts in Paris during Claude Debussy’s 150th birthday year, and invited to perform the composer’s complete Preludes.  Recitals of Debussy in Paris, Sarajevo and the United States led to an invitation to Washington D.C. to be the featured guest on National Public Radio’s Diane Rehm Show entitled “The World Of Claude Debussy.”

Among his U.S. recitals are Bard College, Old First Concerts of San Francisco, Christ Church Cathedral St. Louis, Amherst College Buckley Recital Hall, Harvard Sanders Theatre, the Boston Early Music Festival, the Nantucket Atheneum, the LaGrua Center, and the Frederick Collection.  Steinway & Sons selected him to give five concerts as part of the Legendary Instruments of the Immortals Tour, as well as to present the unique Walden Woods Concert Grand and give lecture-recitals on the Horowitz piano.

Mr. Porter’s many chamber music activities include performances with members of the St. Louis Symphony, and with concertmaster David Halen at the invitation of the Missouri Fine Arts Academy.  He has collaborated with Boston’s Kaleidoscope Ensemble, ‘cellist Katherine Kayaian, and appeared in the Brahms Piano Quintet with the principals of the South Florida Symphony, the Charles Ives Piano Trio at the composer’s alma mater the Hopkins School in New Haven, and the remarkable first piano part for the original version of Rossini’s “Petite Messe Solennelle” at the Merrimack College Rogers Center for the Arts.

His several recitals at the Frederick Collection, as well as an interview regarding his performance of the final three Beethoven Sonatas on an original instrument, have been recorded live for broadcast on National Public Radio. He has also recorded the final three Schubert sonatas, Moments Musicaux and an original song transcription on the Frederick Collection’s 1828 Viennese Graf.